But I don’t want to 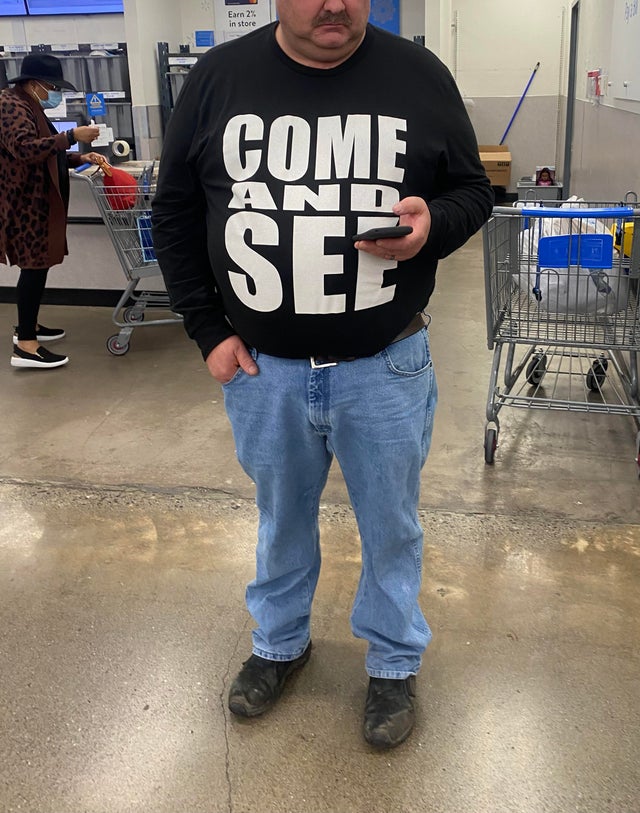 It’s pretty much obvious from the outside. 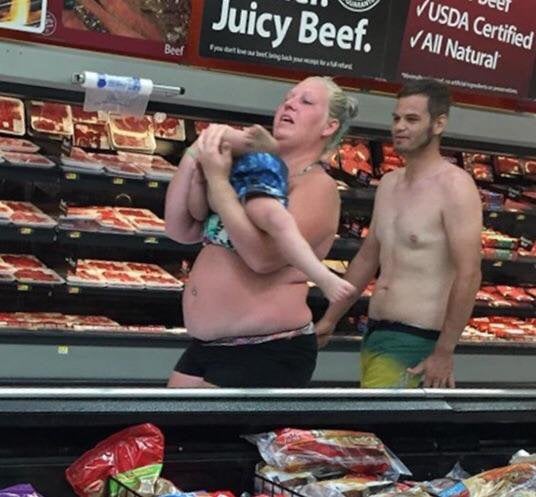 Not sure if they’re going to the beach after Walmart?

I’ve been a CSM (Customer Service Manager) at Wally World for about 6 years now. We had been watching this woman for a few months and knew she had been stealing but just couldn’t seem to catch her, she was always one step ahead of us.

One day I was at the service desk when she came up with some returns. I couldn’t wait to see what she would try to pull since we all basically knew she was a thief. She had a very large bag which she placed on the counter and then proceeded to take out a large amount of clothing. We took a look at the items and asked her why she was returning them. Mind you, after we rung them all up, it was about $180 worth of clothing. She stated that she was sure they would all fit but sadly they did not. This lady was about 5 foot if that and around 200lbs, the clothes were petite. I asked her for her receipt in which she told me she didn’t have one ( shocking ). I told her then that I was sorry but I could not return the items. She gasped and gave me this rather scary look and asked me “Do you know who I am?!” I honesty thought she was going to tell me she was the relative of someone important. She then goes on to tell me “I am Jesus Christ.” I wanted to laugh so badly but being the smart ass that I am, I stated “Well then if you are Jesus Christ, you should be able to produce a receipt.”

I smiled and told her to have a nice day. She left without her clothing.

So, I work third shift in a central Florida Walmart. Weekends are our busiest time, pretty much like any other store. Of course it has its strange and unusual tales like any third shift gimmick of equal proportion. But a few months back, I had the strangest encounter with one of our drunkest customers.

Where to begin? Okay, we did our usual meeting in the breakroom, which ended about 10:20 p.m. and like always, the “shit-your-pants coffee” that they provide was doing a number on my bowels, so I hurried to the front restrooms, as management generally locks the bathrooms in the rear to torment my irregular colon. It seemed that things were going to a decent start, when I hear the shuffling of two pairs of feet, of course anyone can go in and out as they please, so I paid no mind to these people. I continued my duty. I look up and this hispanic gentleman was staring at me through the vertical crack between the door and the partition that blocks me from the rest of the non defecating world. If he had just passed on by, I would’ve been okay, but little did I realize, this man was quite sauced and in need of friendship.

“Hey, you like Julios?” he asked. I paid him no mind, as I was thinking that perhaps he was speaking to the gentleman that came in with him.

“Hey, you like Julios?” he asked again. I looked up and noticed he was staring directly at me, in my pooping position… vulnerable as hell.

Needless to say, my fear response kicked in and evacuating my bowels ceased to be a priority. This gentleman had ruined my intimate moment with the porcelain God. I gave up on finishing and started to wipe with our “John Wayne toilet paper” (Rough and tough and doesn’t take crap from no one), when this guy spoke to me again..

“Oh, yeah man, wipe your ass, don’t worry,” he says, as if that’s not going to make me worry. I finish doing that deed and flush my minor victory down the drain. I pulled up my pants and commence to step out of my tiny cell, when my new Julio friend reaches for me.

“I don’t care if you just wiped your ass, lemme shake your hand!” He says as he reaches to shake my hand. Reluctantly, I oblige, I’d rather not start stuff with a drunken mexican in the restroom of my workplace. Already this guy has broken several rules of the men’s bathroom. I don’t think I need to elaborate.

I took a whiff of the air around, out of sheer instinct… Fecal smell? check… copious amounts of liquor? check.. Yep, our friend was wildly intoxicated. So I asked him “Are you drunk?”

“Yeah, man,” was about all I could understand. Then I asked “Are you driving?” To which he responded, “No, my sister is, you see my friend here was her fiancee, but she broke up with him tonight.” I glanced at his compatriot and he gave me the most embarrassed look I’ve ever seen. He clearly was not as drunk as my new potty partner.

“Well, I hope you’re not driving anywhere this evening…” I said in an asking fashion.

“Oh, no my sister is.” and slurred a few things I wasn’t able to really comprehend. After this, I washed my hands like we’re all supposed to within the company, nodded at the broken hearted fiancee and made my way to the exit. Nearby, I caught a co-worker of mine and began telling her of my creepy experience, she laughed hysterically and we thought nothing of anything.

Then my potty partner returned, shaking my hand and thanking me for taking time to listen…. I’ve worked third shift for years and seen many manner of strange things, but this was by far, the strangest and most constipating experience of my life.

2 Comments Stories
People of Walmart by State
Sidebar A